Gustav Moen is a philosopher and private-practice psychotherapist who harbors a natural curiosity for the relationship between empathy, relational connections, and healing.

He is an engaging and knowledgeable presence who uses a narrative style to connect with his audience in order to nurture understanding through experiential discussions. 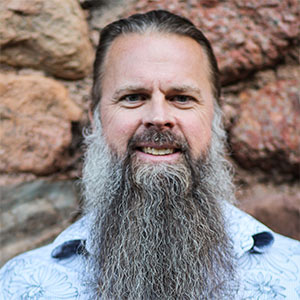 As a child, Gustav was a silent, but strong force. While it would be decades before he knew what it meant to be an empath, he spent his youth, adolescence, and young adulthood trying to cope with the overstimulation of his emotional field through self-medication to the point of alcoholism. While he was acutely attuned to the emotional and physical pain of those surrounding him, he hid from any recognition of his own emotional health, while representing signs of Reactive Attachment Disorder. As he was raised in the era of fear-based parenting, he developed a Lost Child Attachment response and sought to distance himself from the attention of others. He found great comfort, ease of access, and opportunity in competitive sports and excelled in baseball, football, and basketball, which provided an accepted means to release anger and rage, while providing the economic means to complete a college degree, which may have been unsustainable otherwise.

As his alcoholism spiraled dangerously close to fatal, he was forced into self-reflection and a stubborn and angry/conquering approach to sobriety through abstinence. During this dark period in his life, his wife suggested yoga and assigned a few targeted novels for him to read; he found solace and relief in these meditative practices, which spurred more research into the root causes of addiction and anger, which rekindled his love of psychology and the science of the brain. While his relationship with sobriety has been a positive one, he deeply understands the struggles and shame of addiction and how difficult it can be to seek help for a trauma-response with such a negative social stigma. He also understands how anger and rage are a trauma-response and he can help people learn to navigate these responses so that they can control their responses to triggers without a build-up of residual toxic anger.

Gustav was inspired to understand the consequences of developmental trauma when he was helpless to watch his wife’s journey through PTSD with crippling flashbacks and symptoms. He was forced to process his own ineffective responses in order to support her as she processed the release of adverse childhood experiences. It was at this time that he decided to move away from his 25-year career in executive corporate management and operations and return to his early education in psychology and use his insights to assist in the healing of others through psychotherapy.

Gustav has been in the corporate training world for 25 years and has seen the stark contrast of managers who focus on ends over people to the efficacy of those who focus on a people-first approach to leadership and management. As an empathic executive, Gustav has seen remarkable success in the satisfaction, loyalty and dedication, and happiness, not to mention the outcomes and ends, of employees. With his background in psychology, Gustav was able to build meaningful relationships with employees by addressing the individual needs, concerns, and goals of those within his departments. Even early in his professional career, his advice was sought by senior management when his unconventional people-first approach was reaping unprecedented gains. As he attempted to explain to senior management how to engage in the human capital of their employees, he felt as though he was speaking a foreign language. It was at this point he started to suspect that traditional corporate models were places ripe with re-traumatizing situations and scenarios. These unhealthy environments created unsafe atmospheres of mistrust and self-doubt that did little more than encourage competitive burn-out, addiction, and rage. He focused on what he could control: building an environment for supportive collaboration and celebration, which then continued to produce amazing results.

Currently, Gustav wears a few hats. He works as VP of Sales & Operations for an IT training organization, he serves the community as a Director on the Board of Education for his home district, he facilitates healing as a private-practice psychotherapist, and he is a founding member and mentor for the Trauma-Informed Care Training Center, providing TIC training to organizations and individuals.

His work on the local Board of Education has allowed him to work to revise district policies and procedures to become trauma-informed and trauma-responsive. This has resulted in a commitment to become a trauma-informed district, which means each of the schools and every staff member within the district are actively engaged in increasing trauma-informed and trauma-responsive practices to ensure students and staff are safe to develop into whole and healthy individuals. As a tangent to his work on the Board of Education, Gustav has forged an alliance to the City Council, which has engaged his services for training to initiate the path to become a Trauma-Informed Community.

Additionally, as a private-practice psychotherapist, he is aware, informed, and responsive to the impact trauma has on his clientele. He is using a nurturing approach to facilitate growth and healing with his clients so that they feel empowered to name their triggers and responses, as they develop effective healing skills within an average of six sessions. While he focuses on cognitive psychotherapy, he employs a humanistic approach through holistic strategies, e.g. EFT, SSP, EMDR, life coaching, group/family, and movement therapies.