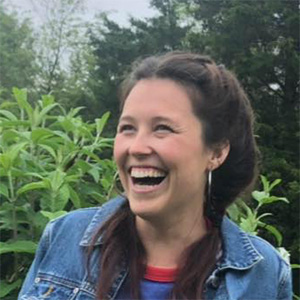 Taylor Alger is a passionate guide, working with generational cycles of trauma on individual and community levels; offering support in transmuting unhealthy patterns and weaving into integrated, resilient lifestyles.

Taylor was raised by a single mother whose disorganized attachment styles and  resulting lack of self-esteem lead to spirals of addiction through substance, spending, and relationships. Due to infidelity and arguments, her parents separated when she was 3 months old; leaving Taylor’s first models of relationships to be damaged and fragmented. Her mother struggled with depression, anxiety, bipolar disorder, and suicidal ideation, and Taylor was often left to be cared for and raised by her grandmother. Taylor quickly developed tendencies to rescue her mother whether through unhealthy, abusive relationships with men, hostile and violent arguments between her mother and grandmother, and especially, as her mother turned to addiction through her early adolescent years.

Influenced by established codependent patterns, Taylor developed an early fascination with understanding depression and addiction; sure that there was something to be seen sooner and deeper than the reactive, rather than preventive, treatment responses that she witnessed through her mother’s attempts at recovery. Taylor recognized that the medications provided to her mother were only addressing the surface level symptoms, fueling her desire to turn towards a more whole approach tending to the roots of wounds and more immersive healing. She began to explore branches of healing ranging from Eastern to Western influences and found further insight into the work that she wanted to bring to others; taking on a sense of martyrdom and neglecting her own healing. Taylor was able to come to a crossroads of realizing that her patterns and choices were not reflective of the healing potential that she hoped to bring to others.

After realizing this, along with the impact that a relationship with nature had on her ability to regulate, Taylor took a break away from the field in order to heal and to expand her knowledge. Taylor has taken the last several years to learn more about land-based and social permaculture design, a self-sufficient lifestyle, and the patterns tied to intergenerational trauma unique to America. Her focus has been on resilience and allowing individuals, families, and groups to reach self-actualization; growing awareness of how trauma especially can interfere with this. She holds a strong desire to offer her experience to others in order to serve as a guide in allowing them to recognize these effects on their everyday lives to be able to incorporate reflective systems and design into their frameworks and build a more whole, healthy, and resilient lifestyle.

Taylor has taken on many hats in the realms of psychology, trauma, and healing. She began her education by having conversations with her mother about her own experience and journey to recovery, attending meetings around sobriety with her, and asking questions of the counselors during her mother’s rehabilitation experiences. She received her Bachelors of Science in Psychology, and after schooling, began a job at a healing arts center where she was trained in various modalities including shiatsu, yoga, EFT, reflexology, and meridian and psychological connection.

Taylor took these skills into mentoring for at-risk youth through a counseling center, and due to her tenacity and dedication to this role, was promoted to provide psycho-education and social-emotional support to at-risk students within an elementary school. She incorporated these skills, along with mindfulness and other somatic practices, into her everyday work with the children and found great success in the student’s ability to regulate through triggering experiences. Through this experience, Taylor was able to become a Qualified Mental Health professional in Virginia. In order to deepen her knowledge in the therapeutic benefits of nature and an overall self-sufficient lifestyle, Taylor transitioned to living in Colorado to work for non-profit organizations bringing nature-based education to low-income communities. She continued to incorporate social-emotional education into this work, developing curriculums to mirror social-emotional processes to those within an ecosystem and undergoing a journey of self-education into historical trauma imposed on oppressed cultures within America.

Now that she has received certification as a Trauma-Informed Practitioner, Taylor is taking efforts to become a Peer Support Professional and to develop her own business. She seeks to create frameworks of design for individuals, families, groups, and communities in order to be able to illuminate their patterns and to incorporate modalities of regulation in order to build a more resilient and healthy lifestyle. She hopes to work specifically within communities whose traumatic experience is unique to America and whose exposure to trauma and adversity has been escalated due to poverty and addiction. She believes that this awareness and transmutation of traumatic patterns can create large impacts on the healing of society to lead to a world more connected to ourselves, more connected to one another, and more connected to the Earth and our place within it.

Taylor has spent several years working within the healing arts. She began her journey through wanting a more preventive and holistic, rather than reactive, approach. In 2015, she began working for a healing arts center where she deeply emerged in various body works including shiatsu, Native American stone medicine, Emotional Freedom Technique, reflexology, reiki, and more. She developed a strong desire for learning of the ways in which the physical and psyche connect and mutually affect one another. She was able to develop both a logical and intuitive understanding of how emotions can manifest within the body and offer guidance to others in establishing this connection and releasing emotional energy that is no longer supportive.

She also has an established understanding of the benefits that time within nature can bring. She has utilized these techniques, combined with mindfulness based practices, within her own life, while working with elementary students within the school system, and with mentoring of middle school and high school aged children. She has found an awareness of nature’s systems and the human experience in these can have profound effects on regulation and sense of belonging in the world. Taylor aims to continue to combine these approaches with easy-to-follow guidelines to allow individuals to regain knowledge that has been lost within society and our culture as a whole.

Method to the Madness: Mental Health Awareness Made Manageable pacesconnection.com/…

Coaching for Community Connection because Relationships are the Agents of Change pacesconnection.com/…

Shame can no longer be accepted as a rite of passage in medicine kevinmd.com/2022/05/…

Send a message to Taylor Alger